While the Chicago Bulls are currently in a three-way fight for the second seed in the Eastern Conference playoff picture, another possibility exists of them slipping out of home court advantage entirely for the first round if they’re not careful.  Falling back into fifth place or even further would be a blemish on the effort that Bulls head coach Tom Thibodeau has made this year. Of course, he could make a miracle run and it still might not affect his tenuous situation for next year and beyond.

That’s because since mid-January, Thibodeau’s been the subject of speculation concerning his job status that’s come primarily from national outlets. Comments that players have tuned him out because his intense style has worn on them are mixed in with a supposedly shaky relationship with the front office.  Then again, the fact that the Bulls are even in the conversation about postseason home court advantage is an indication that Thibodeau has performed above and beyond what’s been expected.  When it comes to Bulls’ management, the complaint has usually been focused toward the minutes his players rack up during the course of the season. That’s certainly a change of pace from two years ago, when team general manager Gar Forman endorsed the philosophy.

No doubt the attitude adjustment stems from injuries sustained. The current injury to Joakim Noah is the latest headache to surface, since Jimmy Butler is also out with elbow issues and won'r return for a few more weeks.  The elephant in the room is the Derrick Rose situation. With him, the Bulls have a chance to challenge for the conference title. However, the ever-present knee trouble has put him out until at least the middle of next month.

If you are interested in betting on sports, I recommend checking out http://www.illinoissportsbooks.org/ which goes into detail about the legalities of betting on sports for Illinois residents and also recommends which online sportsbooks are legal and safe.

Posted by Unknown at 2:17 PM No comments:

No!!! Say it isn't so Mickey!  First we find out that the famed Honus Wagner T-206 card was trimmed by Mastro....now Mickey used Corked bats?  Maybe only in practice?

RIP Chicago Bulls greats, "Stormin' Norman" Norm Van Lier and Johnny "Red" Kerr.
Both, longtime affiliates with the Bulls both passed away yesterday. Norm was often seen on the Bulls pre-post game shows, giving critiques and commentary about the games. He was very knowledgeable, and was known for not pulling any punches and telling it like it was. Red Kerr was a longtime announcer, and one-time coach of the Chicago Bulls. Michael Jordan used to play with him before the game, tossing his chalk powder into the air right before tipoff, just in front of Red Kerr...trying to throw him off his game, which rarely happened. It was good to see Kerr get the recognition from the Bulls for his longtime dedication to the team just a few weeks ago, giving Jordan, Pippen and crew the time to talk to Kerr once again.
Posted by Unknown at 2:15 PM 7 comments: 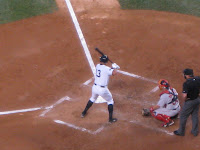 It has become tiresome to keep hearing of all of baseball's stars admit, or not admit, to steroid use. Gone are the days of the fun game, playing with heart. Today, the game is riddled with manufactured results. It makes it hard to spend hard earned money watching a bunch of cheaters destroy the game we love. I miss those HBO specials..."When it was a Game" kinda says it all.
Posted by Unknown at 3:47 PM 1 comment:

Illini have been playing up and down ever since they cracked the top 25 in the NCAA.
Big Ten Road games are always tough, but they skunked it at Wisconsin last week. However, they played bigtime ball yesterday at home vs Perdue. It is nice to see the Illini come back after having a couple of down years since they lost in the title game in 2005. The win gave Illinois head coach Bruce Weber his 250th career victory (250-106). The team decided to take their names off the jerseys this year, focusing on the name on the front, the TEAM concept. Looks like it is working. Outside of Champaign, most are not familiar with the teams big named players - Demitri McCamey and Mike Davis.
Posted by Unknown at 9:38 AM No comments:

Congratulations go out to the Pittsburgh Steelers. 6 time world champions in the NFL.
It was a great game. I was rooting for the Cardinals. They looked flat the first half, but turned it on and almost took the lead at halftime. Man, couldn't tackle on that TD interception return! They played well in the 2nd half, drawing the holding call in the endzone resulting in a safety. Nice run after catch by Larry Fitzgerald looking to seal the game for the Cardinals by scoring late in the game. Then, Steelers marched down to win the game. Did the Cardinals have only 9 guys on Defense? They couldn't stop the Steelers when it counted the most. Hats off to Santonio Holmes...spectacular catch and toes down to score the winning TD. Truly spectacular.

My beef with the Cards...why didn't Warner toss the fade to Fitzgerald at the half, instead of trying to hit Boldin on the quick slant? Fitzgerald grabbed the TD in the 2nd half, one just like it at halftime would have won the game for them.

Speaking of halftime...Bruce put on a great show, sounded great...cracked me up when he yelled "Back away from the guacamole. Put the Chicken Fingers down!" then later, sliding into the camera, crotch first into America's HD tv's.....classic. Great song choices, great 12 minutes.

Bears Notes....Boldin to Bears? that would be sweet.
Posted by Unknown at 11:00 AM No comments:

ESPN's Mel Kiper likes Tyson Jackson, DE from LSU at the 18th Pick for the Chicago Bears. DO you think we need a Defensive end?

I think we need a WR. Brandon Lloyd (go Illini) Marty Booker, Rashied Davis and Devin Hester just can't cut it. They are all, at best #2's, but more likely #3s on a good team. Whaddya think?
http://chicago-sportschat.blogspot.com
Posted by Unknown at 8:54 PM 2 comments: 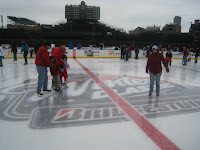 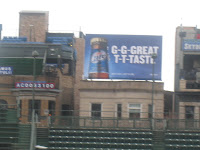 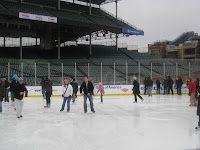 Followup from New Years.
Much better perspective than I would have paid for in the stands.
and it was for charity so that was cool too.
Great news. I didn't fall!
Posted by Unknown at 5:56 PM No comments:

Great presentation, not so great outcome. The Chicago Blackhawks have shown some drastic improvement this year. The team is playing well. The Red Wings just got the right bounces of the puck today. The weather wasn't a factor in the game like it was in the Buffalo - Pittsburgh game was last year. There was some wind, but it didn't seem to come into play. The snow held off, as did the sunshine, which some of the players were complaining about last year. It was nice to see the Cubs play host, bringing our Ryno, Billy Williams, Fergie Jenkins and crew to meet Hull, Mikita, Esposito for this event. Chicago celebs like Vince Vaughn were there too.
It was an interesting rendition of 'Take Me Out to the Ball Game' too.
I liked how they put up a banner around the ice rink that looked like the Wrigley Bricks. Pretty Cool. The throwback jerseys were nice, sure to be a top seller, at least in Chicago...Detroit's were pretty weak with the fancy English D.
The ice seemed to get beaten up faster than in the indoor rinks though, with snow/shavings piling up by the end of the periods. The camera views were a little off too, slightly too far away for my taste. Otherwise this was a great game.
Posted by Unknown at 4:51 PM No comments: